Kara Filipiak has been a Registered Nurse for over 20 years, spending the last 15 months as an OR Nurse at DISC Sports & Spine Center in Marina Del Rey, CA. Over that time, Kara had always wanted to take part in a medical mission but had never found the right opportunity, until one day the right opportunity found her.

Under a new partnership with the Surgical Care Affiliates (SCA), DISC was fortunate enough to have sent two team members to Central America on a medical mission in June of 2015. Artuyun Karapetyan, a surgical technician, and Jessica Lambert, a registered nurse, had gone to Honduras to provide their assistance at the Holy Family Surgery Center, where volunteers from around the United States would convene to provide medical care to the local community, at no cost to them. Now, DISC was offering Kara that chance, but it wasn’t until Kara found out that she could bring her 17-year-old daughter, Jayde, that Kara knew this was the right situation for her. Jayde is a senior in high school, and with graduation looming in the spring, Kara decided this was the perfect chance to spend some time with her daughter in a meaningful way, even if that didn’t mean it would be easy.

Medical missions are typically an expensive undertaking, but the teammates and physicians at the DISC Surgery Center were able to raise enough money to cover Kara and Jayde’s flights. Kara also had to use her own paid time off to cover her absence at work but the opportunity to help others and spend a week with her daughter in Honduras was well worth it.

ara and Jayde landed in Honduras on a Saturday. The first day was spent touring the 2,000-acre ranch where the community is located. The area started out as the Nuestros Pequeños Hermanos Orphanage and is still home to over 450 children as well as nine elderly folk who cannot afford nursing care. It also features a school, housing for the near 50 volunteers and the surgical center. The orphanage is funded entirely through donations.

After the tour, Kara got to spend the rest of the weekend with the local children. She remembers this as one of the best parts of her trip.

“We just hung out with the kids, which was really interesting. They have no electronics, no TV… it’s very minimal but they’re very content. They’re happy and healthy.”

While spending time with the children was one of the more memorable parts of the trip, Kara still had work to do. Starting Monday, she was awake at 6 a.m. and in surgery by 7. The volunteer staff would usually finish up with their surgeries around 6 p.m. and break for dinner, which was accompanied by a presentation on the history of the area and how the surgical center came to be. Tuesday was similar to Monday: up early, in the OR all day and then dinner and a presentation at night.

Wednesday was designated an “early day,” During which the volunteers were out of the OR at 3:00 p.m. to take part in a soccer match against the kids. To hear Kara tell it, 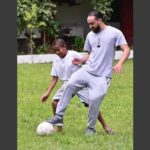 there wasn’t much of a competition. “They are really good at soccer. But it was an organized event, everyone showed up and it was a lot of fun.”

Thursday and Friday were more long days in the OR, but the family-friendly atmosphere made it feel less like just another day at work. Many of the volunteers’ children came into the OR to get a rare glimpse of what their parents did every day. A few of the surgeons’ children even got to scrub in and get an up-close look at their parents in action. Among the kids in the OR was Kara’s daughter Jayde, who woke up early with her mom every day so she could help out. As the week wore on, Jayde grew more and more comfortable in the OR, helping clean up between cases and prep for the next one. It is an experience Kara will never forget.

“I really enjoyed having my daughter there, just having her see a different perspective of how stuff works, which is similar to here but also very different.”

By the end of the week, the volunteers had seen over 1,400 clinic cases and completed 66 surgeries in five days. With some patients being on a wait list for over three years, it was a demanding but necessary schedule. It was also very fulfilling.

As Kara describes it, “You just feel good. When you leave, you feel like ‘I’m tired, I’m exhausted, I want to go home and shower,’ but it’s a really good feeling.” 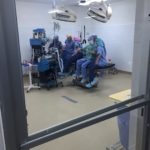 A organizing another 12 missions over the next year, it is a good feeling she would encourage her co-workers and others to experience, perhaps even with an added luxury.

“Starting in January, they’re building a brand new living facility, by hand, with no machines, and it’s going to be beautiful.”

Now back home, Kara reflects fondly on her week in the Honduras, happy and proud to have been a part of something so special. Aside from having Jayde alongside her, she recalls, “My favorite part was seeing the culture and spending time with the [local] kids; they’re really cute. They’re used to Americans coming, so when they see [us], they’re really excited and really appreciative. They come up to you and just start talking, so I enjoyed that.”

As she looks back on the trip as a whole, what stands out most is how much they were able to accomplish in such a short amount of time.

“It was amazing, just to see a different perspective, a different way of life. Overall, it was a great experience, aside from seeing the people in the Honduras, just to see people from all over the [United States], to get together and accomplish all that work with minimal glitches was amazing. None of us knew each other coming in, so that was very impressive.”

It’s safe to say that we’ve all experienced musculoskeletal pain at some point. According to a study by the Centers for...

Why Does Cold Weather Affect My Arthritis?

Anyone who struggles with arthritis knows all about the aches and pains that seem to come along with cold weather. The...

Here’s What to Expect from a Pain Management ...

Consistent pain can be debilitating and discouraging. It can keep you from living the healthy, active lifestyle you want...