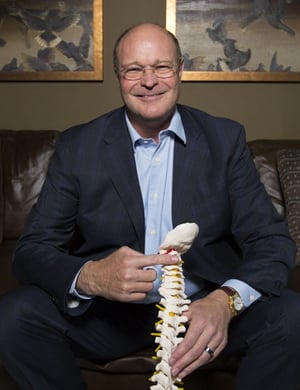 NEWPORT BEACH, Calif. – February 10, 2021 – Dr. Robert S. Bray, Jr., neurological spine surgeon and founding director of DISC Sports & Spine Center, has earned a spot in the Super Doctors® Hall of Fame after being recognized as one of Southern California’s top doctors for a 10th straight year. He is only one of a handful of Southern California spine surgeons to receive such a distinction.

This honor underscores Dr. Bray’s extensive, pioneering work in high-acuity, minimally invasive spine surgery, where he is known for establishing new techniques and developing game-changing instruments, such as the Zeiss operating microscope. Dr. Bray also reimagined spine surgery in the outpatient setting, breaking new ground in Southern California when he launched his own surgery center in 2006 after founding Cedars Sinai’s spine program. He now performs 99 percent of his procedures in the outpatient setting.

Dr. Bray’s DISC Sports & Spine Center has continued to lead the way in both safety (zero spine infections to date) and quality outcomes. His commitment to excellence in spinal care has attracted a patient roster that includes elite athletes, dignitaries and celebrities, such as recent patients Melissa Gilbert, Ruby Rose and Ben Feldman, among many others. Dr. Bray has performed some 14,500 spine surgeries to date. Additionally, he and his team have strived to uphold and further hone their safety protocols in the wake of the pandemic, efforts that have allowed DISC to remain open and able to provide care during tough times.

“I’m truly honored to have reached the distinction of being part of the Southern California Super Doctors Hall of Fame,” said Dr. Bray. “While recognition like this is certainly humbling, I find the greatest reward in seeing my patients active again, relieved of their pain and enjoying a better quality of life.”

Since 2005, MSP Communications, has published its widely regarded, peer-reviewed Super Doctors lists across the country in newspapers, inserts and magazine special sections devoted to Super Doctors. The number of doctors appearing on the list in any given year is limited to approximately five percent of the region's active physicians. Honorees are also found online at superdoctors.com.

Karen Reiter Honored as ASC Leader of the ...

The prestigious award from OR Manager recognizes Reiter’s efforts in taking a quality-first approach to developing DISC’s...

DISC was a proud sponsor of CASA (Court Appointed Special Advocates) Celebration 2022, which was held at Vea Newport Beach...